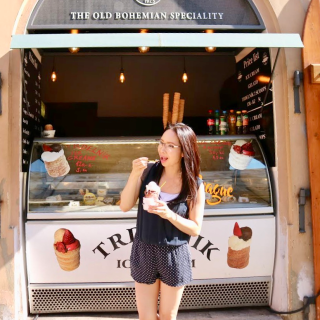 Our tour began in the legendary Victoria Falls Hotel which sits right in front of this amazing waterfall. The light drops of water form a perennial haze which a rainbow continually appears on a  sunny day (Wear a jacket as the water is so thick you actually get drenched just walking back and forth in front of the waterfalls)

A short flight from there into Okavango Delta which was amazingly lush for Africa due to it being encompassed by the Okavango river reaches a tectonic trough and splits around the delta therefore hemming in the wildlife into a relatively small area for some of the best wildlife spotting in Africa.

Right outside of the camp was a family of Giraffes whose graceful posture imitates the trees next to them. This is iconic Africa for postcards but seeing their long beautiful necks with spotted patterns up close is truly amazing.

After chasing after the roar of lions around, we finally stopped the engine and saw three lions emerging from the bush heading straight for us…. no more sleeping lazy lions here from zoos. They were in their primal aggressive state asserting their dominance.   Apparently they were challenging the Alpha lion and a pride of lions who has just taken a kill.

The game tour began in the wee hours of the morning (4am) with the cold air greeting us as we edged along out of Chief Camp within minutes we saw one of the most beautiful sunrises coming up behind a beautiful tree. In the stillness of the morning one really comes face to face with an inner peace and sense of ancestry to this land where man began.

As we chased a lion feeding on a new kill our jeep suddenly got stuck in an “Elephant Hole” made by the depressions of their feet on marshy ground. It was funny for the first few moments until the lion pride started noticing our guide going outside the truck to pass a tow line to the other truck…. our tour leaders started to get really nervous and another truck came to pick us up (Please note I was 6 months pregnant haha).

We headed back to the camp for lunch and a nap (to ease our nerves – more for our poor tour organisers). Mid afternoon we were back on the trails and our luck changed as we were treated to a bewildering array of beautiful specimens from the animal kingdom.

In perhaps a clever marketing gimmick, safari’s have been hyping on catching the “Big 5” animals. We were lucky enough to see all of them but the rhino is extremely shy and we only saw fleeting glimpses of it. The elusive leopard however was much easier to spot as we parked underneath a tree and watched it for hours. The cape buffalo picture was taken from afar and was also a set meal for the lions gorging on it with unmatched ferocity. I would replace the buffalo with the Hippopotamus which gushed huge fountains of water (apparently they stopped the kayaking in the area as they had a habit of snapping them in two). On our way back to camp on the last trip, we came across a Elephant herd crossing right in front of us. The matriarch stomped right in front of our truck to protect the little ones cross in a display of motherly care (I could totally relate!).

After a long day my husband (last picture) and I enjoyed a sunset dinner where we sat around a campfire with the sound of lions roaring in the background. It sounded so romantic until we noticed their sound getting louder…. suddenly people stopped laughing and joking and started to stand near the fire. Our guides positioned the vehicles in a circle around us and flashed the lights into the bushes. Lo and behold two large eyes stared back at us… a lion was not 10 meters away! Planning an escape route to the trucks, the guides gently said not to worry and to stay in a large group with the fire behind us as the lions get intimidated. It worked and in a few minutes we settled down to dinner. What a truly adventurous trip but always listen to guides and DO NOT go chasing lions with your camera (amazing how some tourists completely loose control and caution).

A safari truly deserves all the hype and cost as it is without a doubt one of the most natural wonders left. We are so happy that it is being preserved in Botswana and hope the rest of Africa does the same so this precious gift can be passed down to their children’s children and eco-tourism can truly be the cornerstone for Africa’s recovery.

One thought on “A Classic Expedition to Africa”